Person(s) placing the cross on behalf of the Arlesey Remembers You Project: Alissa Granada

Alfred enlisted in Hitchin and joined the 11th Battalion of the Royal Sussex Regiment.

The Battalion’s War diaries from the Easter weekend (29th– 31st March) 1918 tell us the Battalion were in position in a sunken road due north of Aubercourt before they were given orders to move to Courcelles, were they were joined by the 13th Battalion. They were attacked by the enemy at 6am on March 30th and formed a defensive line, which held until 7am when the enemy got behind their right flank and forced them to withdraw through Aubercourt to the Army line north-west of the village. They held this position until 11am when the enemy enfiladed them from high ground on the other side of the river, forcing them to retire to the sunken Villiers Bretonneux – Aubercourt Road. At 12 noon they joined the 13th Gloucester’s on high ground in front of Bois de Hangard. 300 men from the Battalion were reported killed, wounded or missing when they made it back to the billets at Amatre on April 5th.

A newspaper report from the Biggleswade Chronicle 10th May 1918 states “ Pte Alfred Street, who was wounded on Easter Sunday with a gunshot wound to the spine and was admitted to Queen Mary’s Hospital, Whalley, after everything had been done to save his life, passed away at the hospital in the presence of his father and mother, on Friday last, May 3rd. He was 19 years of age last January and joined the army on February 20th 1917, drafted to France 1918. He was previously employed at Mr J Hall’s farm where he was very much respected. One of his comrades while in the act of picking him up when wounded was killed instantly, and he (Pte Street), had to be carried four miles to the dressing station. On a previous occasion the deceased and a few others appeared to have been trapped by the Germans and they had to hastily retreat, but the deceased was so fatigued that his comrades were unable to carry him, so they dragged him along until they got to a place of safety. The deceased was formerly a scholar at St Peter’s Church Sunday School, and just before he joined the Army he was attending the confirmation classes, but had to leave Arlesey before the Confirmation day.

The body, which Military authorities arranged be brought home by rail, arrived at Arlesey Station on Monday evening. The funeral took place on Tuesday afternoon. The Rev. G. J. Mayhew officiated and there were a large number of sympathetic friends in the Church and at the graveside. The funeral arrangements were carried out by Mr E Smith of Arlesey. There were a large number of a beautiful floral tributes, and among them was one with the inscription ‘To a hero, from workers at H. M. Stores, Arlesey. R.I.P’.

A year ago we watched him

And hoped our Eternal Father

Would give to us again

His young sweet life so nobly

Given for our sakes;

At last was taken from us

From his loving Mother, Father and sisters, Church End, Arlesey. 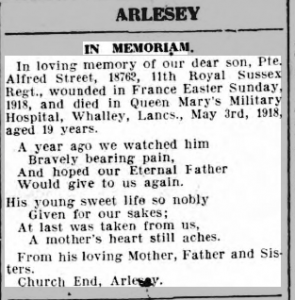