Person(s) placing the cross on behalf of the Arlesey Remembers You Project: Rick & Margaret Brabrook

Ronald was born in Arlesey in 1900, the son of Thomas & Elizabeth Devereux. At the time of Ronald’s birth the family were living in Asylum Road and Thomas was working as a general labourer.  By 1911, the family had doubled in size, and Ronald had an older brother, John, an older sister Dorothy and two younger sisters, Edna & Grace, who all lived together in Davies Row, Arlesey.
When Ronald was old enough to work he was employed as a porter at Three Counties Station. He was a member of St Andrews Mission Church Choir and the Arlesey United Gospel Temperance Society, and took an active part in connection with the Boy Scouts.

Ronald joined the East Surrey Regiment and was in the 8th (service) Battalion, the machine gun section. The Battalion landed at Boulogne-Sur-Mer as part of the 55th Brigade in the 18th (Eastern) Division in July 1915, and fought at the Battle of Loos and the Battle of the Somme. One well-remembered incident occurred on the 1st July 1916, when B Company of the 8th Battalion went into attack dribbling two footballs, which the Company Commander, Captain Wilfred Nevill, had bought for his platoons to kick across No Man’s Land! Captain Nevill lost many of his men during the advance but the 8th were one of the few battalions to reach and hold their objective on this day. The “Football Attack” caught the imagination of the country and illustrations of it are in the Regimental Museum, along with one of the footballs used.

Thomas and Elizabeth received a telegram in early November 1918, stating that Ronald had sustained a serious shell wound in the back. A further telegram was then sent to inform them that Ronald had died at the Casualty Clearing station.

Ronald is remembered with honour at Premont British Cemetery. Premont is a village 19.5km southeast of Cambrai and was captured by the 30th American Division on 8th October 1918. The cemetery was made and used by four casualty-clearing stations (the 20th, 50th, 55th and 61st), which came to Bohain in October 1918. 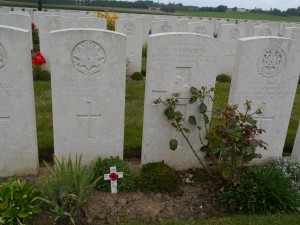 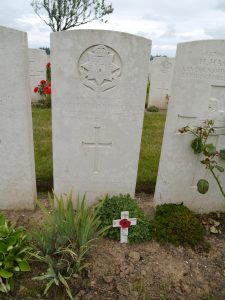 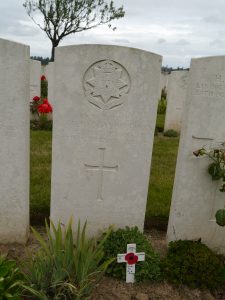