Person(s) placing the cross on behalf of the Arlesey Remembers You Project: Lesly Elliott & Lyn Hesse.

Frank Topham was born in 1889 to Fred and Clara. Frank was born in Langford as we believe Clara was from Langford. The family however live in Arlesey, Fred was an 'Arlesey man' and worked as a grocers assistant.

In 1915 Frank married Lily Presland at Arlesey Wesleyan Chapel. The couple moved to Hitchin as Lily took up a post as a school teacher at St Mary's.

After only a year Frank was called up for service. He served in the Bedfordshire and Herts regiment.

OnJuly 18th 1917 Frank was killed in Belgium die to the effect of the first gass attack, He was buried at Mendighem Cemetery Poperinge. In 1924 Lily and Frank's sister Alexie travelled to France and Belgium to see Frank's grave. They also went to the Menin Gate to find Frank's brother's name Walter on the memorial.

Lily visited Frank whilst he was training at Felixstowe in 1916, she went during the August and October School holidays. During her October visit she recalled a German Zeppelin came over the town and barracks. They watched the search lights playing on the Zeppelin over the sea. IT was rumoured that one of our anti-aircraft brought it down in the sea. The barracks had been bombed but no casualties.

Frank received 2 medals which were sent to Lily in 1921. The letter read:

" Madam, I am directed to transmit to you the accompanying British War and Victory medals which would have been converted upon no 31340 Pte Frank Topham Bedford Rgt. had he lived, in memory of his services with the British forces during the Great War.

In forwarding the decorations I am commanded by the King to assure you of His MAjesty's high appreciation of the services rendered.

In 1918 after the first world war Lily remembered it all, "Land of Hope and Glory". The school marched to Priory Park. Lily saw a little boy crying during the march and ran to his Grandma, he was brought back into line and he was told, "Your father died for this day".

Lily returned to Arlesey after she retired from teaching and lived to be over 100 - she had many interesting tales to tell. 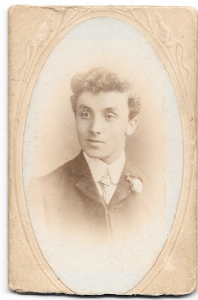 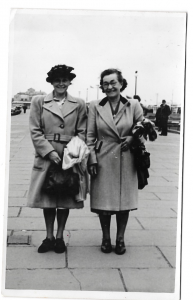 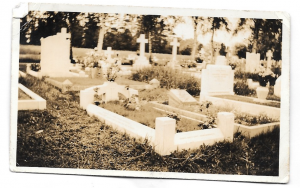