Person(s) placing the cross on behalf of the Arlesey Remembers You Project: Trudy Crouch

Frederick was born in Arlesey in 1893, the son of Frederick and Mary Elizabeth Jefferies. In the 1901 census the family were living at 8 New Road, Arlesey and consisted of Frederick Snr, a brick yard labourer, Elizabeth, Arthur (born 1885), a general farm labourer, Albert (born 1887) a brickyard labourer, Minnie (born 1892), Frederick Jnr, Alfred (born 1896) and Evelyn (born 1898). In the 1911 census the family were living on the High Street in Arlesey – Frederick Snr was a brick loader, Frederick Jnr was a kitchen boy, Alfred was an eye glass cleaner, Evelyn was a scholar and the new addition, James William (born 1902) was also at school.

Frederick was employed at the Arlesey (Beart’s) Brick Co (Ltd) before he enlisted for the Army in Bedford in 1914 and joined the Bedfordshire Regiment (soldier number 240133), later joining the 2nd (City of London) Battalion of the London Regiment, also known as the Royal Fusiliers.

Frederick acted as officers’ servant for 2 years for Lieut. Waterton and Captain Smith. Before joining up

In October 1917, the second line battalions of the London Regiment were stationed at Passchendaele. The fate of these battalions makes for sad reading. They were positioned with the 58th Division (2/1stLondon Brigade) below the Poelcapelle-Spriet Road on October 26th lending support to the Canadians in the final battle for Passchendaele. The assault began at 5.40am. The 58th Division took 3 pillboxes before being stopped by German machine gun fire and exhaustion due to the muddy conditions. The Brigade sustained 386 casualties in the attack on Passchendaele

In the Biggleswade Chronicle of 23rd November 1917 it was reported that “Mr and Mrs F Jefferies have received the following official letter, informing them of the death of their son, Pte. Frederick Jefferies:- ‘Madam, we regret to have to inform you that a report has this day been received from the War Office to the effect that Pte. Frederick Jefferies was killed in action on October 27th 1917 (France)”.

Frederick is remembered with honour at Tyne Cot Memorial in the West-Vlaanderen region of Belgium. The memorial is one of four to the missing in Belgian Flanders covering the area known as the Ypres Salient. It bears the names of almost 35,000 officers and men whose graves are not known 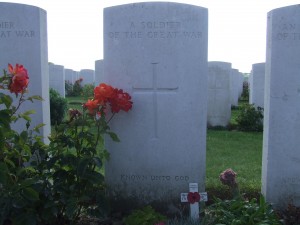 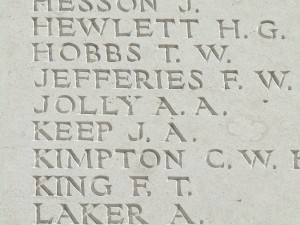