Herbert was born in Arlesey in 1888, the oldest child of John and Sarah King. In 1891 the family were living on Arlesey High Street and John was employed as an agricultural labourer. Herbert had two younger sisters, Annie born in 1890 and Florence May born in 1891. By 1901 the family had moved to Seymours Row, two more children had been added to the family – Arthur born in 1893 and Kate born in 1897. John was working on a farm as a horse keeper and Herbert was working as a labourer in a tea warehouse. By 1911 Herbert and his brother Arthur were both working as brickmakers and all the girls bar Kate had left home.

In 1915 Herbert married Annie J Crawley, who lived with her grandparents, James & Hannah Jackson on Davis Row in Arlesey.

Herbert appears to have been called up to the army in 1916 as part of the military act and joined the Bedfordshire Regiment.

On 8th April 1917 Herbert was with the 2nd Battalion in France when he was wounded in the head, arm and leg. He was home in Arlesey on 10 days sick leave in June 1917, having made remarkable progress. It’s possible he joined the 4th Battalion as a replacement for the severe losses the battalion had received. The 4th battalion were a special reserve battalion based at Bedford. They were moved to Felixstowe after the war started to provide home defence around Harwich, as well as drafts for the frontline battalions. After the disaster on the Somme in July 1916 they were mobilised and sent to the Western Front where they became part of the 190th Brigade of the 63rd (Royal Naval) Division. Although their frontline service was relatively short, 855 officers and men were killed while serving in the battalion, with a further 3,600 more being wounded.

During the Second Battle of Arras the battalion were engaged at the Battle of Drocourt-Queant in September 1918. The battalion were moved into position near Queant on 26th September and commenced operations at 5.20am on 27th September, crossing the Canal du Nord and capturing their objective in the Hindenburg Support Line. During this operation 8 officers and 12 men were killed, with another 61 men wounded. Sadly, Herbert was one of the men who were killed in action.

Herbert is remembered with honour at the Vis-En-Artois Memorial in the Pas de Calais region of France. The memorial bears the names of over 9,000 men who fell in the period 8th August 1918 to November 11th 1918 in the Advance to Victory in Picardy and Artois between the Somme and Loos, and who have no known grave. The fallen belonged to the forces of Great Britain, Ireland and South Africa. 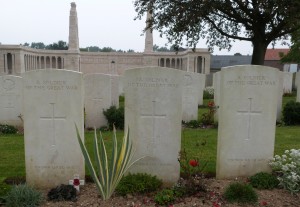 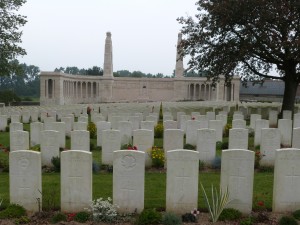 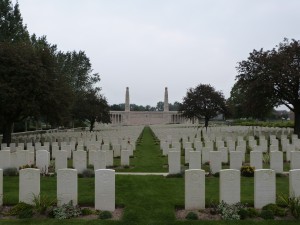