James William Crawley was the eldest son of Albert and Emma Crawley. He was born in Arlesey in 1887 and his sister Annie followed in 1890. Albert was employed as a carrier and in 1891 the family were living in Paradise Row, Arlesey. By the time of the 1901 census Albert was working as a coal hawker and James was employed as a labourer. A younger brother, Frederick, had been born in 1900. Sister Annie was living with her Grandparents, James and Hannah Jackson. By 1911 Paradise Row had become Davies Row, Albert was a coal dealer/merchant, James was a coal carrier and Frederick was still at school.

When war broke out James seems to have joined the Duke of Cornwall’s Light Infantry after enlisting in Bedford, and was part of the machine gun section. James was in the 6th (service) battalion that had formed at Bodmin in 1914, and was under the command of 43rd Brigade in 14th (Light) Division. The battalion landed in Boulogne on 22nd May 1915, and was disbanded in France on 20th February 1918. The men were engaged in various actions on the Western Front including; 1915 – The Action of Hooge, part of the first flamethrower attack by the Germans, and the Second Attack on Bellewaarde; 1916 – The battle of Delville Wood and the Battle of Flers-Courcelette; 1917 – the German retreat to the Hindenburg Line, the First Battle of the Scarpe, the Third Battle of the Scarpe, The Battle of Langemark, The First Battle of Passchendaele and the Second Battle of Passchendaele; 1918 – The Battle of St Quentin and the Battle of the Avre.

James was killed in action on 23rd August 1917, at the age of 31. The 14th Division had been ordered to make an attack which took place on the 22nd, the objective being a ‘Green Line’ running from Jasper Avenue, at the southern point of the divisional line, eastwards to round Herenthage Chateau, then northwards through Fitzclarence Farm, then north-northwest through Glencourse wood to the most northerly point of the wood. The 6th Battalion of the Duke of Cornwall’s Light Infantry (DCLI) would assault on the right, having as their take the capture of Inverness Copse and the open ground between that and Glencourse Wood as far as the line of Fitzclarence Farm. At zero hour (7am) on 22nd, the assaulting troops moved forward. In the centre the 6th battalion DCLI was held up at once by machine gun fire from the front between Inverness Copse and Glencourse Wood. The arrival of a tank enabled the battalion to capture and occupy the northern portion of a trance, which was still 400 yards short of the objective. On 23rd August an early morning attack with tanks had been arranged to capture the remainder of the Green Line, but owing to anti-tank gunfire and the state of the ground, only one tank managed to get beyond the line of the Infantry and reach its objective. Soon after this the enemy delivered a strong counter attack on the front between Inverness Copse and Glencourse Wood. There were many casualties from all the battalions involved in the battle. One of whom was James.

James is buried at the Tyne Cot Cemetery near to the town of Ieper. A year after his death his family placed the following “in memoriam” in the Biggleswade Chronicle: In ever loving memory of our dear son, and brother, Pte James William Crawley, Duke of Cornwall’s Light Infantry, Machine Gun Section, killed in action in France, August 24th 1917, aged 31 years. One year has gone, yet still to memory dear, we breathe his name and shed a silent tear; Time cannot alter love so deep and true, the year brings back our grief anew.

From his loving Mother and Father, sister and brother (Arlesey). 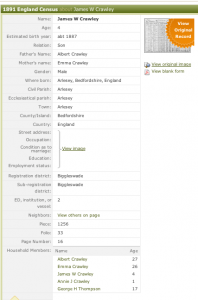 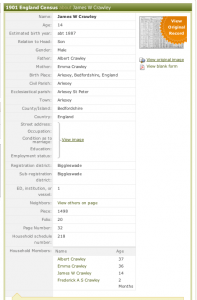 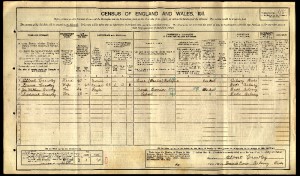 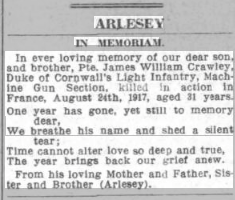 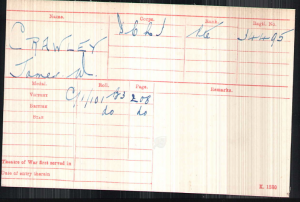 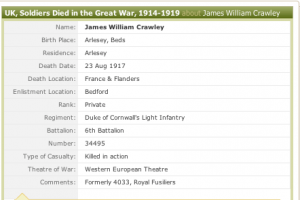 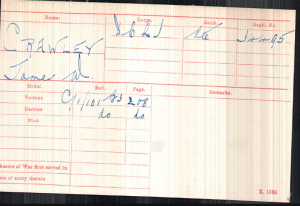 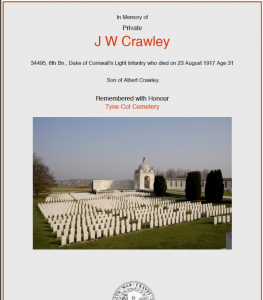 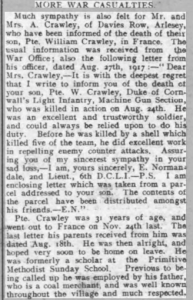