Person(s) placing the cross on behalf of the Arlesey Remembers You Project: Callum O'Dowd

On the Arlesey War memorial is the name A. Martin. It has been difficult trying to identify some of the men on the memorial, and A. Martin is one of them. After many months of scouring the records available on the Internet, and trawling through the newspaper archives, the man behind the name is revealed.

Arthur was born in 1883 in St Pancras, Middlesex. His mother was Eliza Bethell (She married Charles Bethell in 1891). Arthur first joined the Hampshire Regiment at the age of 18, he completed 8 years of service, serving his country in South Africa, Malta & Bermuda,  before being transferred to the reserves on March 3rd  1909, and finally being discharged on 24th February 1913. At the outbreak of the First World War he enlisted for the Bedfordshire Regiment in Hitchin in August 1914. He joined the 1st Battalion, a “regular Army” battalion that formed part of the 15th Infantry Brigade, in the 5th division. The original soldiers of the 1st & 2nd Battalions were amongst the “Old Contemptibles” – the title used by the proud men of the original British Expeditionary Force. They were the professional soldiers of the British Army. By the end of November 1914 the division had suffered 5,000 casualties and stayed in a purely defensive role throughout that first winter of the war.

In early 1915 the division had moved on to the Ypres salient. It was here in March 1915 that Arthur was injured during battle. The war diary of the 1st Battalion from the days leading up to Arthur’s death recounts the battles the Battalion were involved in:

11 Mar 1915 Situation in 32 (a) trench unpleasant. Germans hold one end of it & also have trench parallel to it about 40 yards away & partly enveloping it at the end they hold. Impossible to show a periscope for more than a few seconds without getting a bullet through it; & quite impossible to see where firing comes from as no heads (enemy's) show above their parapets & no rifles can be seen at loopholes. Capt. Ogden (Charles Augustus OGDEN, attached from D.L.I.) wounded & five other ranks. Enemy bombed junction of 32(a) trench & 33 trench (held by 5th Fusiliers [sic 3rd Royal Fusiliers?]) with heavy trench howitzer. About 20 yards of parapet blown in, killing or burying about 16 of 5th Fusiliers.

17 Mar 1915 - south of Vlamertinge Battn. left YPRES and returned to billets in newly erected huts S. of VLAMERTINGE. Brigade being in reserve.

Arthur was one of the casualties mentioned, and he died of his wounds on 17th March 1915, aged 31 years. He is remembered with Honor at the Poperinge Old Military Cemetery, West-Vlaanderen, Belgium. The town of Poperinge was of great importance during the war, it was the nearest place to Ypres. It was at first a centre for Casualty Clearing Stations but by 1916 had been moved further back and field ambulances had been brought in. The cemetery was made in the course of the first battle of Ypres, and was closed to commonwealth burials at the beginning of May 1915.

At some point after being discharged from his first term of service in the Army it seems Arthur moved from London to Arlesey, and was working as a Postman in the area. The Bedfordshire Times & Independent newspaper dated 26th March 1915 gave a report from Private E Pike (an Arlesey soldier) who mentioned the Arlesey Postman, Pte A Martin, a reservist, had been killed. 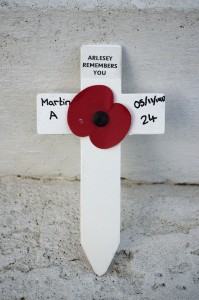