Person(s) placing the cross on behalf of the Arlesey Remembers You Project: Bob Humphries

Alfred was born in Arlesey in 1893, the youngest son of Ernest and Fanny Dear. The family lived near the Rose & Crown pub on the High Street in Arlesey and was made up of Ernest and Fanny, 3 daughters (Sarah, Florence & Grace) and a second son, Reginald. Ernest was employed as a Brick Yard labourer. In the 1911 census Alfred was living with his sister, Sarah, who was now married to Arthur Clarke and living with her 5 year old daughter, Ellen, at 1 Buckridge Building, Portpool Lane, Holborn, London. Alfred’s occupation was given as Pantry man at Club.

When the war broke out Alfred enlisted in the Duke of Cambridge’s Own (Middlesex) Regiment in Holborn, Middlesex on 1st September 1914, at the age of 21. He gave his trade/calling as “messenger”. His service records tell us he was 5 feet 6.5 inches tall and weighed 136 lbs. He had a birth mark on the back of his right arm. He left Southampton bound for France on 25th July 1915 landing at Le Harve on 26th July. In 1916 the Battalion were in action on the Somme in the Battle of Albert, capturing their objectives near Montauban, as well as taking part in the Battle of the Ancre. In 1917 they were involved in Operations on the Andre, before moving on to Flanders where Alfred was killed in action on 24th November 1917.

Alfred’s death was reported in the Bedfordshire Times & Independent on 21st Dec 1917 “The death of Pte Alfred Ernest Dear, Middlesex Regiment, took place in France on Nov 24th. He was the youngest son of Mr Ernest Dear, Mid-village, Arlesey and joined the colours Sept 1914. He was last home on leave in October. His sister received a letter from him on the day he was killed stating he was alright. For a long time Pte Dear had been acting as officer’s servant, and had a very narrow escape of losing his life a few weeks ago when a shell burst near him and his officer, but both escaped injury. As a lad he was employed at Queen Ann mansion, London as a valet and later was employed at the Piccadilly Hotel, London, where he was held in high esteem. He was 25 years of age, and as a lad was in the Arlesey Church Choir”.

In August 1918 the remaining person effects of Alfred were returned to his sister, Sarah, at her address in Holloway. These included a watch in a tin box, photos, letters and cards and a book.

Alfred was rewarded the 1914-1915 Star, the British War Medal 1914-19 and the Victory Medal for his service to the Country. He is remembered with honour at the Bleuet Farm Cemetery, near Elverdinge, West-Vlaanderen, Belgium. Bleuet Farm was used as a dressing station during the 1917 Allied offensive on the front. The cemetery was begun in a corner of the farm and was in use from June to December 1917. 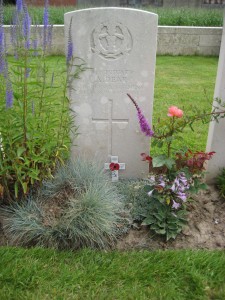 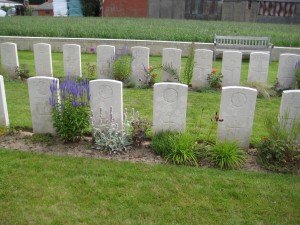 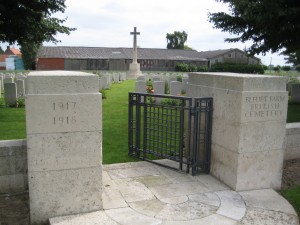