They picked up the names during their assault against the Kiretch Tepe Sirt on 15th August 1915 an observing Staff Officer observed their progress through his binoculars and saw the battalion’s metal flashes glinting yellow in the sun as they advanced. He remarked, “By Jove! If only we had one or two more battalions of those yellow devils we should be across the peninsular by tomorrow”. With that the battalion’s nickname – The Yellow Devils – was born.

The Bedfordshire Roll of Honour for Arlesey has for its entry for H A Lowe "possibly Herbert Angel Lowe, 2/Lt. RAF. Pilot at No.10 Training Depot Station, Harling Road, Norfolk. Died of pneumonia 4th November 1918 at Thorpe Hospital,Norfolk; next of kin were his father, in B.Columbia, Canada, and wife, in Catford, S.London. Buried at East Harling, Norfolk. Grave ref. 226".

At the time the Arlesey Remembers You crosses were being laid this was the only information available to us. We have now discovered that there are no links between Herbert Angel Lowe and Arlesey, and the H A Lowe from Arlesey who gave his life during the War was, in fact, Harold Ayling Lowe. You can read his story below:

Harold was the eldest son of Thomas William Low and Julia Ayling of Breachwood Green, near Welwyn Hertfordshire. He was born in Lower Clapton, Middlesex on 15th April 1890. Shortly after his birth Harold was living with his parents in Wratten Road, Hitchin and Thomas was working as a Police Constable. In 1901 Harold was living with his parents and brothers John & Albert and sister, Lily in Cole Green, Hertingfordbury, Hertford. Thomas was a Police Constable. Harold attended Cowper Testimonial School, Hertford from 13th October 1902 until 14th May 1905. In the 1911 census Harold is living with his mother, brothers John and Albert and sisters Lily and Edna at Grantham Cottage, Knebworth, Hertfordshire.

Harold enlisted in the Kings Royal Rifle Corps in London on the 3rd July 1915, at the age of 25 years. Before enlisting he had been employed as a clerk by The Great Northern Railway Company, and was living on Hitchin Road, Arlesey. Harold was posted to the Kings Royal Rifle Corps on 9th July 1915 and posted to BEF on 23rd December. Harold was admitted to hospital on 4th July 1916 suffering from wounds to his face that were described by the Medical Officer as being “of a trivial nature”. His injury occurred while he was in the performance of military duty. He was granted a furlough from 23rd November to 3rd December 1917 to visit his parents and stayed at the Queen’s Head in Breachwood Green, Luton. After returning to the front, Harold was reported as missing on 21st March 1918 and his death was presumed to have occurred on this date. On the date he is presumed to have died, Harold’s battalion were engaged in the Battle of St Quentin (21st -23rd March). The German barrage began at 4.40am along a 40-mile front. Trench mortars, mustard gas, chlorine gas, tear gas and smoke canisters were concentrated on the forward trenches, while heavy artillery bombarded the rear in order to destroy the Allied artillery and supply lines. Over 3,500,000 shells were fired in a five-hour period, hitting targets over a 150-square mile area. The early morning fog had delayed the use of aircraft but by the end of the day 36 squadrons of the Royal Flying Corps had been in action and reported losing 16 aircraft and crew while having shot down 14 German aircraft. This first day of “Operation Michael” is the second worst day in Military history, surpassed only by the first day of the Battle of the Somme on 1st July 1916. By the end of 21st March the British were fighting a desperate battle of survival in their rearmost defensive trenches. British casualties were reported as 38,500, which included almost 21,00 British soldiers being taken prisoner.

Harold is remembered with honour at Pozieres Memorial. This memorial commemorates over 14,000 casualties of the UK and 300 of the South African forces who have no known grave and died on the Somme between 21st March and 7th August 1918. The Rifle Brigade are the most highly represented with over 600 names on the memorial 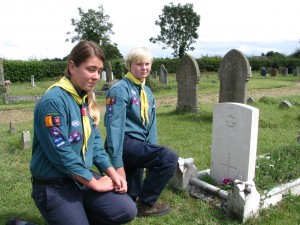 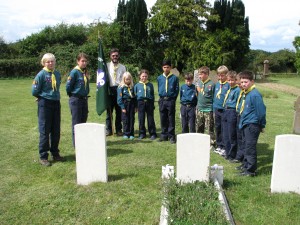 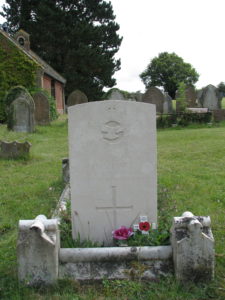 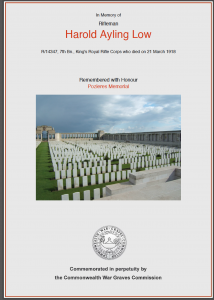 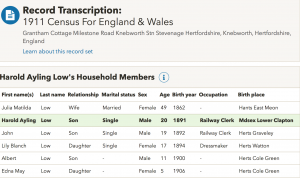 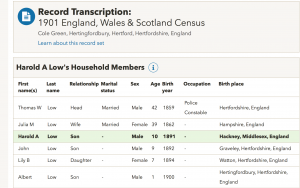 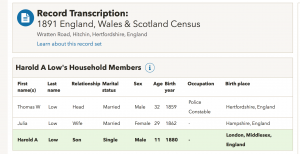