Person(s) placing the cross on behalf of the Arlesey Remembers You Project: Kayla Ward

Wilfred Aaron Gibbs was born in Lambeth in 1878 to Aaron and Martha Gibbs. By 1891 the family had moved to The Hermitage in Church End, Arlesey, as Aaron was the manager at Eastwoods, a local brick manufacturers. By 1911 Wilfred was working as a builders labourer at the same brickworks. There are no records to Wilfred’s whereabouts between the 1891 and 1911 census.

At the outbreak of the war Wilfred joined the 1/5th Battalion of the Suffolk Regiment, enlisting at Wisbech. The Battalion formed part of the Norfolk & Suffolk Brigade of the East Anglian Division. In May 1915 they became the 163rd Brigade of the 54th Division, and were mobilised for war on 30th July 1915, embarking for Gallipoli from Liverpool, via Mudros and Imbros. The Division landed at Suvla Bay on 10th August 1915 and were engaged in various actions against the Ottoman (Turkish) Empire. They were evacuated to Mudros in early December of that year due to the heavy number of casualties they had sustained as a result of combat, disease and the severe weather. They moved on to Alexandria and took over the defence of a section of the Suez Canal. During 1917 they were involved in the First, Second and Third Battles of Gaza and the Battle of Jaffa.

The 2nd Of November saw the Battalion engaged in action at the Third Battle of Gaza. The British had been defeated during the First & Second Battles of Gaza in March and April of 1917 and a stalemate occurred throughout the summer months. Early in the morning of October 31st the Allied Forces, under General Edmund Allenby, launched an attack on Turkish positions at Beersheba in Palestine, beginning the Third Battle of Gaza. On the night of November 2nd, Allenby began operations against Gaza with a night attack along the coast. Advancing two miles, the British were able to hold their gains against determined Turkish counterattacks. It was during this Battle that Wilfred was killed in action, along with 18,000 other British servicemen and 25,000 Turkish men. He died on 2nd November 1917 and is remembered with honour at the Gaza War Cemetery.

Although there is no mention of a wife in the 1911 census records there is a marriage entry for Wilfred Aaron Gibbs in the marriage index, suggesting he married Gertrude Alexandra Longley in Leeds in 1903. It would also seem he had a daughter by the name of Ethel Annie Gibbs, who was born in Arlesey in 1904. In the 1911 census Ethel is living with her Grandmother, Christiana Longley, a Grocer, in Leeds, Yorkshire. There is no information about what happened to Wilfred & Gertrude. 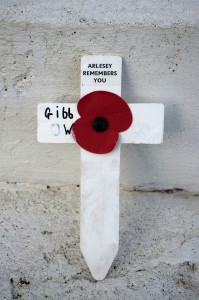 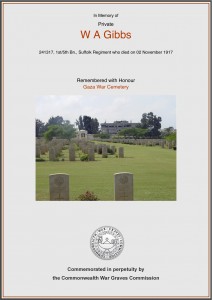 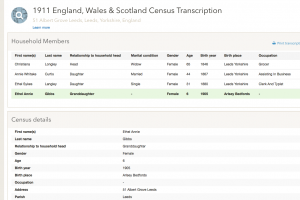 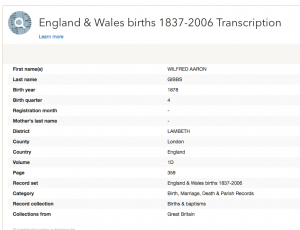 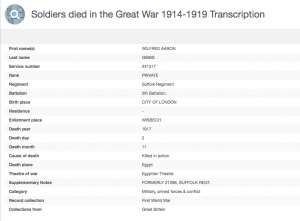