Person(s) placing the cross on behalf of the Arlesey Remembers You Project: Aimee Sheehan

William was born in 1889 in Spittlegate, Grantham in Lincolnshire. His father was Thomas Eldred and his mother was Sarah Eldred. He had at least 3 sisters and a brother called Robert. Within two years (by the time of the 1891 Census) the family had moved to the Radford area of Nottingham.

By 1911 his father had died and his mother and elder brother Robert had moved to Chapel Lane, Hoby in Leicestershire. Robert worked on the railways. William also worked on the railways, although by the start of WW1 William was living in St. Pancras in London. He married Evaline Matthews in Brighton at the end of 1914.

William had been in the army reserves and he was called up and joined the 8th Battalion the East Kent Regiment (also called The Buffs) at St. Pancras and was sent to France on the 31st August, 1915.

The Buffs were fighting in the Calais area of France at the time, and were part of the Battle of Loos. The battle had 6 divisions of men involved and it started on September the 25th. At the time the battle was called “the Big Push”. A lot of soldiers died on the first day, but the British were able to get quite close to enemy positions. However after being stuck in the trenches overnight close to the village of Verdin le Vieil, and being attacked by enemy snipers, the battalion were ordered to retreat late in the morning of the 26th September 1915. They lost 12 officers and 165 other ranks of men that day; William was one of them. Unfortunately he was listed as missing in action for a year before actually being confirmed as having died. William was only 26 when he died, he had been in France for 27 days. He was awarded the 1914-15 Star, the British war Medal and the Victory Medal.

William’s wife Evaline had a daughter, Rene, a few months after his death. She was staying with her sister in Arlesey at the time William went missing, and for a while afterwards (before going home to Euston, London) and that is why he is on our War Memorial.

He is also listed on Stone number 15 at Loos Memorial Cemetery and also the War Memorial at Hoby, Leicestershire. 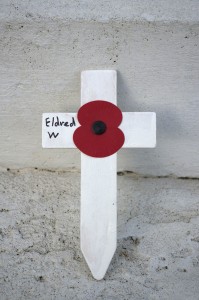 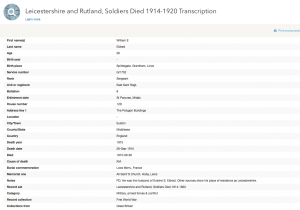 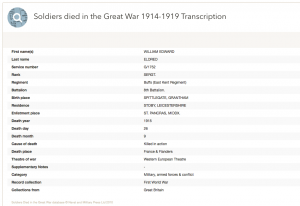 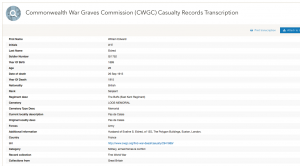 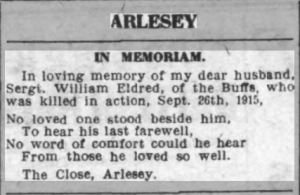 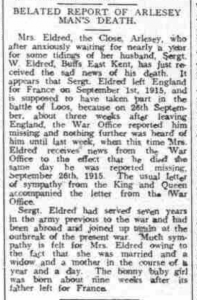 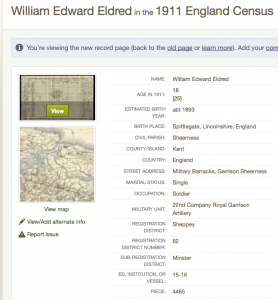