Person(s) placing the cross on behalf of the Arlesey Remembers You Project: Kerry Hazelwood

Frank was born in Huntingdon in 1893, the son of Samuel Cooper North and Rebecca North. Samuel was a Railway signalman, originally from Wakefield in Yorkshire. In the 1901 and 1911 census the family were living in East Street Newtown, Huntingdon. In 1911 Frank was employed as a Grocers Errand boy.

Frank enlisted in the 1st Battalion of the Bedfordshire regiment on 5th or 6th September 1914 as part of the New Army enlisters who responded to Kitchener’s famous poster. Before enlisting in the army Frank was employed as a porter at the Three Counties Hospital and was a member of the Wesleyan School bible class.

Frank arrived in France on April 9th 1915 when the battalion were in trenches opposite Hill 60 in Ypres. On May 1st the Germans made a sudden attack on the allied trenches with asphyxiating gas and shells and all the men in the right trenches were violently sick. One man died as a result of the gas attack, and 22 men were admitted to the hospital. By May 3rd the men had been issued with mouth pads or bandages and a solution of soda as prevention against the effects of the gas.

Just after 8am on the morning of May 5th the Germans attacked the trenches again with more asphyxiating gas from two points opposite the British trenches. The 1st Bedford’s stuck to their trenches, though a few men were killed by the gas and the remaining men were all badly affected. The trenches were attacked all day with bombs, rifles and machine guns. In total 3 officers and 290 men were killed during the ferocious attacks on the trenches by Hill 60. One of the casualties was Frank North, who died on May 5th. He is remembered with honour at Ypres (Menin Gate) Memorial. 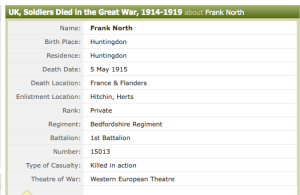 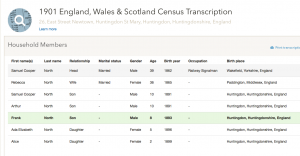 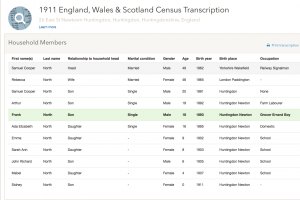 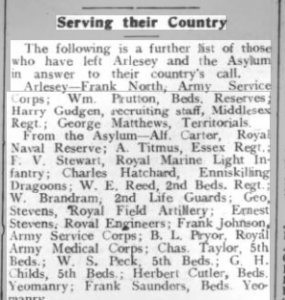 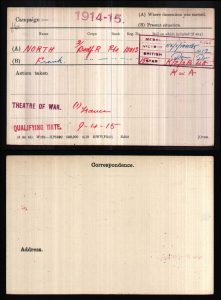