Arlesey Remembers You is a project like no other. Not only were 87 bespoke hand made crosses placed on the graves of each individual soldier commemorated on the village war memorial, placed during the centenary year of the beginning of the First World War, the community made a film about it. Here is the film

Arlesey Remembers You is an ambitious project to commemorate the centenary of the beginning of the first world war by laying a bespoke poppy cross on the graves of each of the 87 fallen listed on the village’s War Memorial.

Duncan Wang has been an Arlesey Resident for over 30 years, he's raised his family in the village and has been a Town Councillor for 1 year. Duncan has a long standing interest in both the first and second World Wars, and has regularly made trips to visit the various war cemeteries of the Western Front and beyond. So one November evening late into a town council meeting, his ears pricked up at the mention of a possible first world war commemoration project.

At least once every five years, every known SAS memorial in the world, is visited by at least one member of the regiment and a wreath of flowers is laid. Inspired by these SAS ceremonies, Inspired by this, Duncan thought this could form the basis of a project for Arlesey.

He researched the 87 names on the war memorial using web sites such as www.cwgc.org and identified the location of each grave.   One name has their grave in Iraq which Duncan could fore see would be difficulty to visit.   For his idea to work, he wanted to establish how a cross could be placed there because without this the project wouldn't be complete and to his mind at least the project wouldn't be viable.   He wrote to the British Embassy in Baghdad who were more than willing to assist see their letter.Click To View

Having located all the graves that are known and recorded all the basic information about each solider, Duncan reported back to the council with his idea - to lay a poppy cross on the grave of all 87 soldiers listed on the Arlesey War Memorial. The idea was given the go ahead and a working party was set up. Cllrs Mick Holloway & Chris Gravett worked with Duncan to form a project plan and begin recruiting community volunteers to bring the project to life.

The working party soon welcomed Jodie Chillery, Jim Bowskill and Jason Auburn who together with the founder members have recruited as many community members, individuals and groups, as possible to get involved in any way they can.

The main aim of the project is to individually commemorate each of the 87 names on the village war memorial by placing a personalised cross on each of their graves.   The crosses are to be placed by residents of the village.   Supporting this will be research into the 87, the war memorial itself and other related subjects,  the results of which will be used to build a web site and thus leave a legacy for future generations.

The graves span five countries and 48 different cemeteries, the furthest being Iraq, the closest is St Peter’s graveyard in Arlesey and in between, France , Belgium, Turkey and Israel. Residents are volunteering to make the trips to lay the crosses, the majority of which are in France and Belgium. The crosses will be laid between April and November 2014 culminating in a special remembrance service at the War Memorial on Remembrance Sunday. Community members are also involved in creating a legacy for the project and a resource for future generations.

Each cross is bespoke and hand made by the year 4 pupils at Gothic Mede Academy. The children painted the crosses white for peace, created a marbling effect on the back to reflect the materials the War Memorial is made of and then hand wrote the name and date of the death of each soldier on the cross with the legend “Arlesey Remembers You” printed at the top.

Etonbury Academy and Arlesey Youth Club Juniors are writing biographies of each of the soldiers based on information and research provided by residents and relatives. The biographies will be available to see on this website.

The project officially launched at a special ceremony held after the Annual Civic Service at St. Peters Church in April 2014 where the first 11 crosses were laid by children representing different groups from the village, including the Guides, Scouts, Brownies, Rainbows, Pebbles, Arlesey Youth Club, Arlesey Junior Football team, Etonbury Academy, Gothic Mede Academy and Samuel Whitebread Academy. Over 300 people came to witness the event, press articles relating to the event can be seen here Click Here.

All of the crosses have now been placed as of november 2014. However if  you wish to be involved in the project, to volunteer to research a soldier and write a biography for this website - you can contact us via the contact form. Click Here.

The project is multifaceted and has engaged a number of artistic residents who are helping to create a legacy of the project.

David Borrington, local artist and director of Dekkle Printmaking Studios is producing 87 bespoke limited edition etchings and prints based on the research into the 87 individuals listed on the War Memorial.  David intends to release the works on or around the centenary of the date of death of each soldier.  David is an accomplished artist his work focuses on political current affairs and historical politics. To find out more about the prints or to purchase one please contact David via his website Click to visit.

Chris Gravett is a photographer specialising in documentary, social documentary, charity and live music photography who has lived in Arlesey for over 35 years. As a founding member of the Arlesey Remembers You project it has been his intention to create a limited edition photobook documenting the project. The photobook will be available on completion of the project. For more information on this please contact Chris here Click to visit

Finally Chris very quickly involved his documentary producer daughter Jodie in the project. With a background in documentary, current affairs and factual programming Jodie is producing a documentary film following the progress of the project. After crowdfunding some money, begging and borrowing some equipment Jodie has managed to secure a transmission of the final documentary on the Community Channel in late November. The film will track down surviving relatives of the servicemen and through interviews with participants of the project and relatives, the story of some of the men will unfold. Jodie also hopes to hold a screening in the village for everyone who has been involved before the national transmission. For more info about the film Click to visit

This website has been created as a community resource to collate all the information and research this project uncovers. The website has also been put together by Arlesey residents Jason Auburn and member of the Arlesey Remembers You team Mick Holloway with the help of childsdesign Click to visit.

Community members Jim Bowskill, Samantha Ward and Jason Auburn have contributed a great deal of time to historical research and provided the project with a vast amount of information all of which will be available here.

Led by active community member Sandra Sarll a number of Arlesey residents also got together to raise some money for the project.

The Arlesey Remembers You team would like to thank everyone who has been involved so far, with laying crosses, fund raising, researching and attending the team meetings at the Vicar’s Inn. 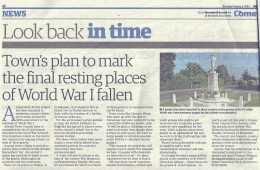 Press article that ran in The Advertiser on the 26th March 2014. Click To View...

Press article that ran in the Comet on the 6th February 2014. Click To View...

On 5th July volunteers from the Arlesey Remembers You team manned a stall at the Arlesey Fun Day. The weather, as usual on the fun day, was unkind, wet and windy. We only had a table top so things were a bit grim until the scout leaders came to our rescue with the loan of a pop up enclosure offering protection from the elements. The highlight of us attending the fun day was to display the first two of a series of commemorative etchings being created by local artist...

Press article that ran in the Bigglewade Chronicle on the 9th May 2014. Click to download a copy of this article Article courtesy of Laura Hutchinson – Biggleswade...