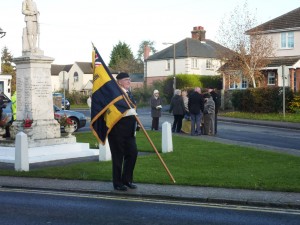 The memorial in Arlesey stands at the junction of the High Street, Church Lane and House Lane. It was first discussed at local meetings in 1919, but the original suggestions were quite different from what was later decided. It has come to light there were in fact three memorials to the fallen soldiers in Arlesey – the memorial on the triangle at the start of the High Street, one in St Peter’s Church and another in the Wesleyan Chapel (now a private residence).

The early discussions and meetings about a memorial for the village were reported in the Biggleswade Chronicle. The following are extracts of newspaper cuttings from the time.

(The text has been copied as written)

The news in the February parish Magazine (which is type-written), states that the main study that is before the parish now is the course to be adopted for a memorial of our brave dead. What shall it be? Fresh suggestions  are coming in: Four almshouses endowed and placed in the hands of trustees; A piece of land in Mid-Village, with a common for the children to play in instead of the streets. A Church-end Parishioner” has suggested as part of the memorial, the re-planting of young elms to take the place of those that have been cut down recently in The Chase.

In accordance with the suggestion of the Archbishops, the vicar, on Sunday evening, preached a special sermon on the duty of thanksgiving for God’s mercies to us as a nation during the past year. Special prayers were offered for our statesmen at this time, and for those to assemble at the Peace Conference. At the close of the service, standing before the temporary memorial, the vicar read out the names of the 69 men from Arlesey who had fallen in the war, the congregation standing, also during the playing of Greig’s Funeral Lament, most feelingly given on the organ by Frank Allen. Immediately after the “Roll of Honour” had been read, the service concluded with the National Anthem. The vicar intimated in his sermon that a parish meeting would soon be called to consider what form a Village Memorial should take.

It is understood that the “Parish Magazine,” which has been edited by the vicar for the past 20 years, can no longer be carried on owing to the great increase in the cost of printing and material. The loss of this parochial monthly record is much to be regretted.

A Wesleyan War Memorial meeting was held on Monday evening. A fair number were present including Mr C. Kerridge, junior, of Cambridge, who has been asked to carry out the work. The memorial will have a brass plate centre with carved old English oak frame, and will contain the names of all those who have fallen in the war from the village. It will be fixed on the inside of the north wall of the chapel, and the cost will be £75 complete. The Committee have about £60, and the work will be completed by the end of February, or the beginning of March 1920. Mr. Kerridge said he would do his best to give every satisfaction, and he thought the memorial would prove a beautiful design when completed. The treasurer Mr. Brake, reported that the Arlesey Cement Co. Ltd., had kindly sent £5 towards the memorial.

*This memorial is no longer in place and its whereabouts are unknown.

At a Parish Meeting in 1923 parishioners included The Lamplighter, Representatives of the War Memorial Committee, members of the Parish Council and members of the public. The topic of installing a Memorial to the war dead was discussed. Subscriptions for this purpose amounted  to £17.12s.6d (seventeen pounds, twelve shillings and sixpence).

A plan was submitted which was accepted. The cost less the two bases could amount to £200. The Chase site was chosen, near to the Chestnut tree, the Clerk was instructed to place the order with Mr. Borrowdale. 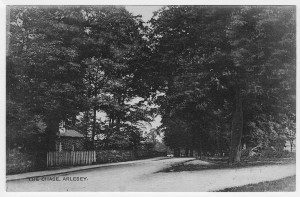 Image of the triangle of land with the Chestnut tree still in situ. Taken from a collection of postcards supplied by Doreen Rix.

The Chestnut tree to be felled to make room for the new War Memorial. The sum of £10.00 was donated by W. F. Beart. Messrs. Tidnam offered to provide fencing around the Memorial.

The order for the construction of the memorial was placed with stone masons Borrowdale from Worksop in Nottinghamshire were contracted by Arlesey Parish Council in 1923.

It was constructed of stone on a square two-stepped base surmounted by plinth and figure of a serviceman standing with arms reversed. 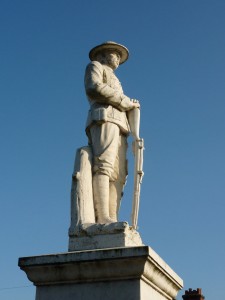 Reflecting the uniform of the first world war infantry, the soldier is facing south, with Brodie Helmet, Short Magazine Lee-Enfield (SMLE rifle) SD tunic and trousers, ankle boots and long ‘putties’. The figure is shown on a grass plinth standing against a wooden post with the rifle pointing down in the ceremonial stance of ‘Reverse Arms’ – a symbol of mourning or
at a state funeral.

The inscription in black lettering on the sides of the plinth lists all the names of fallen soldiers in the two world wars plus a short verse. The whole structure is surrounded by 8 white posts joined by chain. There are flower urns at the base corners of the plinth.

Other names have been added at a later stage with two being inscribed on urns the sides of the base. 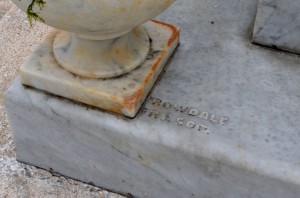 The makers inscription is partially visible

The text below is from the Parish Council records of 1923 showing the decision behind the memorial.

Procession to meet on the bridge at 2.30p.m. To include the War Memorial  committee, Ex-servicemen Arlesey Silver Band, Nursing Sister, Women’s Institute, Friendly Society, Cricket Club, Football Club. School children and Ambulance United Choirs to lead the singing. The unveiling is to be performed by Captain Lucas of Shillington. The lesson to be read by Dr. Fuller, and a total of 5 hymns to be included. The Roll of Honour to be read by F. C. Levitt followed by two minutes silence. Dedication to be by Rev. Mayhew.

Transfer of the Memorial to the keeping of the Parish Council to then take place by R. C. Lucas. Acceptence of this to be by W. J. Crawley Chairman to the Parish Council. Then a hymn. Reveille and the Last Post. 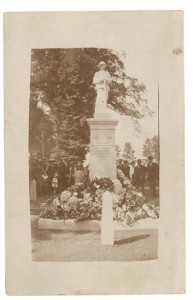 Ceremony at the memorial and is dated 15th July 1923. Taken from a collection of postcards supplied by Doreen Rix. 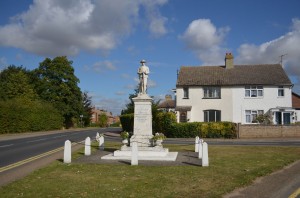 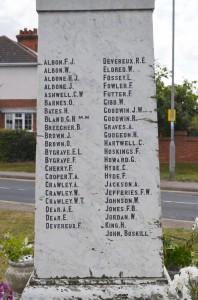 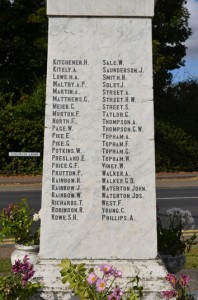 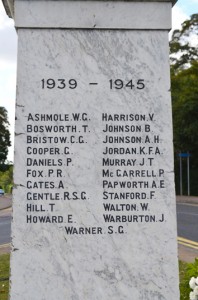 The memorial, owned and maintained by Arlesey Town Council, is as much a part of the village now as it ever was, and every year, is the focal point for the annual remembrance service. Local groups and school children, from the village are present and march from the end of Lymans Road to the memorial then back again after the service.

Flowers are regularly placed at the foot of the memorial by local individuals and organisations who take responsibility for decorating the memorial for a two week period during the summer months. 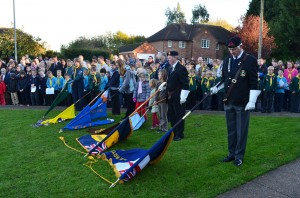 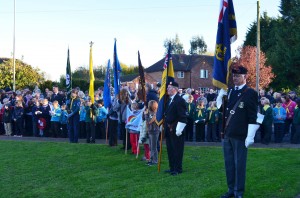 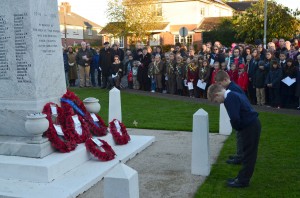 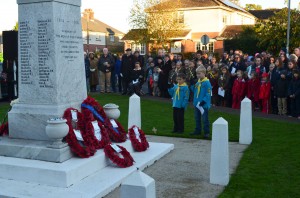