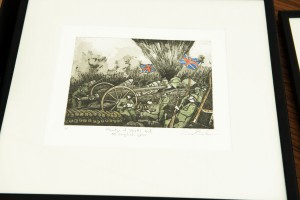 On 5th July volunteers from the Arlesey Remembers You team manned a stall at the Arlesey Fun Day. The weather, as usual on the fun day, was unkind, wet and windy.

We only had a table top so things were a bit grim until the scout leaders came to our rescue with the loan of a pop up enclosure offering protection from the elements.

The highlight of us attending the fun day was to display the first two of a series of commemorative etchings being created by local artist David Borrington. Over the next four years David will produce a limited edition etching commemorating each of Arlesey’s 87 servicemen commemorated on our war memorial. Yet another aspect of this major community project. 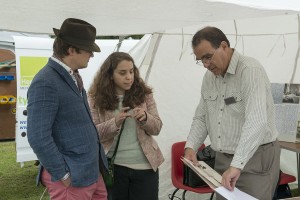 At the fun day we also sought additional cross placers for the remaining 15 unallocated graves -mainly in France and Belgium. Thanks to those who helped man the stall, the scouts for the loan and to Jim Bowskill who provided some entertainment with his music box.