Person(s) placing the cross on behalf of the Arlesey Remembers You Project: Carl Haughton

Percy was born in Arlesey in 1898, the son of George and Annie Prutton. In 1901 the family; George, Annie, sons Bertie (1897), and Percy, and daughter Edith (1901) were living on Crawley Terrace, Hitchin Road and George was employed as a general farm labourer. By 1911 the family had moved to Church End, Arlesey – George was working as a horseman on a farm, Bertie was also working on a farm and Percy was a kitchen boy at a farm. The family were connected to the Wesleyan Chapel in Arlesey.

Percy joined the Territorial Forces in November 1914, following in his older brother Bertie’s footsteps. He later joined the 10th Battalion of the Essex Regiment. The 10th Battalion were a Service Battalion, raised at Warley, the regimental headquarters. They had the pick of the Officers and NCOs who were recalled to the colours or retained in England. They were sent to France on 26th July 1915 as part of the 18th Division. In May 1915 The Biggleswade Chronicle reported that the Wesleyan Chapel had read the roll of honour – both Bertie and Percy were reported as being wounded.

In May 1918 George and Annie received an official letter stating that Percy was posted as missing on April 26th. It appears this happened only 2 weeks after he landed in France. His last letter home was dated April 19th and stated that he had been up at the firing line and that he was going up again. The 10th Battalion had been fighting in the second Battle of Villers-Bretonneux, when an assault was launched against the Allied lines to the east of Amiens. This battle was notable for the first major use of tanks by the Germans, and the first tank-versus-tank battle in history. The fighting in Villers-Bretonneux in April resulted in 9,529 British casualties – among them Percy Prutton who was killed in action on 26th April, aged 20 years.

Percy is remembered with honour at the Hangard Communal Cemetery Extension on the Somme in France. There are 536 commonwealth soldiers commemorated at this cemetery extension, 294 of them are unidentified, but there are special memorials to 8 casualties known to be buried among them. 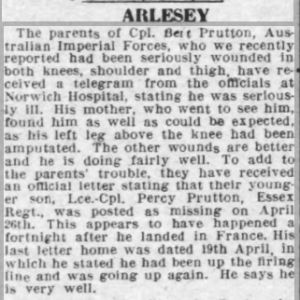