Thomas Richards was born in 1881 in Luton, Bedfordshire. He was the son of Charles and Sarah Richards. Thomas had 5 sisters and 4 brothers and the family lived at 94 Albert Road, Luton (1881/1891 census), before moving to 147 Hitchin Rd, Luton sometime before the 1911 census was taken. On 4th October 1913 Thomas married Emma Worsley at St Matthews Church in Luton, the ceremony was conducted by the Rev. H Coate. Emma was employed as a domestic servant in Luton, but was born in Hitchin, Hertfordshire. In late 1914 Thomas and Emma were blessed with a son, who they called Stanley Charles Thomas Richards. The family lived at 178 Park Street, Luton.

Thomas enlisted for the army in Bedford and entered the 2nd Battalion of the Bedfordshire regiment. The battalion formed part of the “Immortal” 7th division of the British Army. They were engaged in the Battle of Neuve Chapelle in March 1915. The war diary of the 2nd Battalion gives details of this battle:

* Further information shows that Pte Richards 6684 was one of these 4 men that originally made it into the enemy trenches: “At about 7.00am Major Denne (Bedfords’ second in command) was organizing a counter attack to regain the lost trench when he was wounded and had to be removed from the line completely, dying as a result some two years later. Captains Cumberledge and Baird took charge and led A Company in the attack, which was disastrous. Every last Officer and man was hit during the 150 yard charge, with many of them falling as they left the trenches and the regimental history remarks that those who made it into no man's land lay in a straight line where they fell as a German machine gun took them in enfilade. Only a handful of Bedfords actually made it into the German trenches, being Captain Baird (wounded), Sgt 9238 Woods (wounded), Pte 7072 Wareham (wounded), Pte 9446 Coxall (wounded), Pte 9957 Day (killed), Pte 8006 Hodson (wounded), Pte 6684 Richards (killed)”.

By the time of Remembrance Sunday 2014, the name T. Richards had not been fully researched, so the Arlesey Remembers You project placed a cross on the Arlesey War Memorial in grateful thanks for the sacrifice this man had made for his country. We now know Private Thomas Richards is remembered with honour at the Le Touret Memorial in Pas de Calais, France after dying in battle on 12th March 1915. The Le Touret Memorial commemorates over 13,400 British soldiers who died in this region of the Western Front from October 1914 to the eve of the Battle of Loos in September 1915, and who have no grave.

Sadly, only 2 weeks after Thomas’ death, the Luton Times & Advertiser reports the death, at the age of 6 months, of his baby son, Stanley. At the moment it is unclear what the link is with Pte Richards and Arlesey, other than a small piece in the local paper reporting the deaths of three Arlesey soldiers at Neuve Chapelle: Pte Bert Breached, Pte Tom Richards and Pte James Brown. 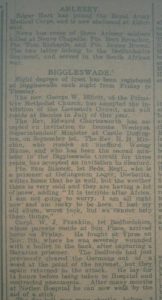 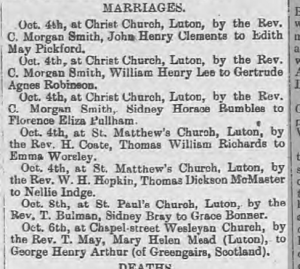 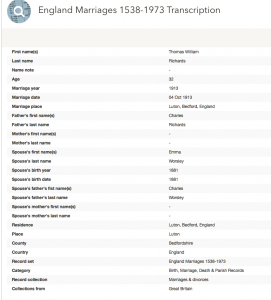 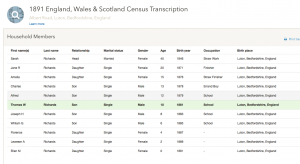 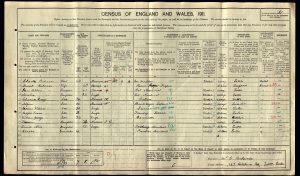 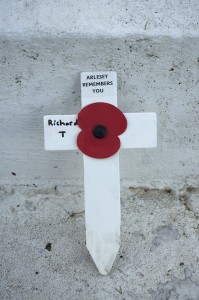