Person(s) placing the cross on behalf of the Arlesey Remembers You Project: Jason Auburn

In 1911 William married Florence M Fisher. Their marriage was registered in the Biggleswade District. In 1912 their son Jack was born, followed in 1913 by their second child, Clarence.

William & Florence were living on the High Street, Henlow when William joined the war action. William was a Naval Reserve man and had previously served 12 years in the Navy on board HMS Amazon and other warships. At the outbreak of war he was called up and drafted to HMS Aboukir, which was engaged in patrolling the North Sea.

The Aboukir was one of the ships that took part in the Heliogoland engagement. Heliogoland is a small German archipelago in the North Sea, located 29 miles off the German coastline. Under the German empire, the islands became a major Naval base and during the First World War, the civilian population was evacuated to the mainland. The first naval engagement of the war, the Battle of Heliogoland Bight, was fought nearby in the first month of the war. The Aboukir played a minor role in this battle as part of Cruiser Force “C”, in reserve off the Dutch coast and saw no action.

On the morning of 22nd September, Aboukir and her sister ships, HMS Cressy and Hogue, were on patrol without any escorting destroyers as they had been forced to seek shelter from bad weather. They were not expecting submarine attacks but had lookouts posted and one gun manned on each side to attack and submarines sighted. U-9, commanded by Kapitanleutnant Otto Weddigen, had been ordered to attack British transports at Ostend, but had been forced to dive and take shelter from the storm. On surfacing she spotted the British ships and moved to attack. She fired one torpedo at 06:20 at Aboukir that struck her on the starboard side. Captain John Drummond thought he had hit a mine and ordered the other two ships to close so he could transfer his wounded men. Aboukir quickly began listing and capsized at 06:55, by the time Drummond had ordered “abandon ship” only one lifeboat was available because the others had either been smashed or could not be lowered as there was no steam available to power the winches for the boats. The HMS Hogue approached to help rescue the men and was struck by a torpedo at around 06:55 and capsized about 10 minutes later, sinking at 07:15. HMS Cressy attempted to ram the German submarine and continued her rescue efforts until she too was torpedoed at 07:20. She took on a heavy list and capsized before sinking at 07:55. The combined total from all three ships was 837 men rescued, 62 officers and 1397 enlisted men lost. Of these, Aboukir lost a total of 527 men.

William was a leading stoker on the HMS Aboukir and his family in the UK heard no tidings of him for some days after the disaster. Florence feared he had perished, and these fears were confirmed on Monday September 28th when she received a telegram from the Admiralty informing her that her husband was not among those saved.

The Biggleswade Chronicle of 2nd October 1914 says “ William would be remembered as a quiet, steady workman, a good husband and father, and was respected in both Henlow and Arlesey, at which latter place he worked previous to being called up for service”.

Another Arlesey man, Harry Osborne, was also on the Aboukir and was rescued by the Lowestoft cruiser. He says the last he saw of William was on the Monday evening when they were on the deck together smoking their pipes. Another survivor told Osborne he saw William just before the ship went down and he was in a very fearful way because he could not swim.

The Royal Navy and Royal Marine War Graves roll lists William’s cause of death as ‘killed or died as a direct result of enemy action’. William’s body was not recovered for burial and he is commemorated on the Chatham Naval Memorial and the Arlesey War memorial. 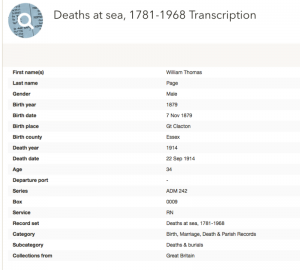 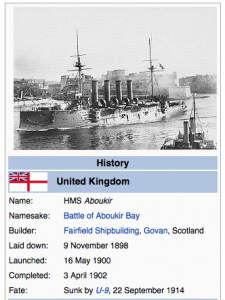 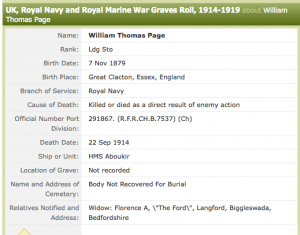 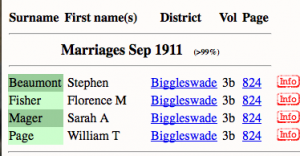 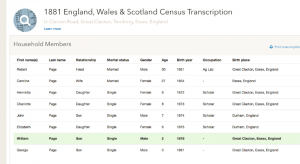 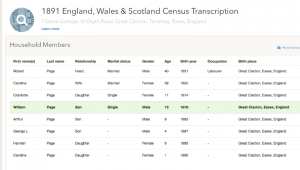 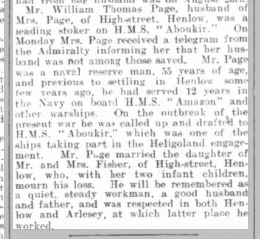 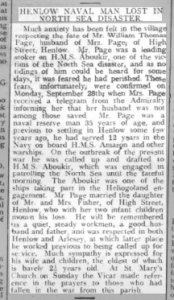 A cross was placed at the Chatham Memorial on behalf of the Arlesey Remembers You project by Jason Auburn in 2014.