Person(s) placing the cross on behalf of the Arlesey Remembers You Project: Richard Waterhouse

Ernest was the son of James and Elizabeth Dear. Ernest lived on Straw Street in Arlesey with his parents and older siblings – Jane, Jemima, Emma, Fanny and James, and 2 younger brothers, Charles and George and a younger sister, Bertha.

Ernest enlisted in the Army on 14th March 1899, joining the 3rd Battalion of the Bedfordshire Regiment and serving in the South African Boer wars. Prior to enlisting he was working as a brickyard labourer for Mr W Prutton. His service records tell us that at the age of 19 years and 11 months he was 5 foot 7.5 inches tall, weighed 117 lb, had a fair complexion with blue eyes and light brown hair. In 1912 Ernest married Rosie Kitchener.

When the war broke out Ernest re-enlisted in the Army and served in the 1st Battalion of the Bedfordshire Regiment in France.  On 24th November 1914 Ernest arrived home in Arlesey on leave and was welcomed with great enthusiasm by a large number of people. He’d been sent out to Belgium on September 18th and was engaged in several battles. On October 29th, whilst in Ypres, he had been wounded in the hand and had marched 8 miles to get to a temporary hospital. He was later brought to Exeter Hospital where he saw Sidney Papworth, another Arlesey soldier, who had been wounded in the arm.  On his arrival back in Arlesey he found a new baby (a daughter, Lily) at home to welcome him. He was home on leave for 2 weeks before returning to France.

On July 11th 1915 Ernest was killed by falling debris when the Germans blew up a mine as they held lines near the infamous Hill 60 (nicknamed Murder Hill). His wife received a postcard from Headquarters informing her that something had happened to her husband but so much of the content was crossed out she failed to understand its meaning and had to write to the War Office – at the end of July 1915 she was still anxiously waiting for further news from them. The Biggleswade Chronicleof 20th August 1915 reports “ Pte Sidney Papworth 1st Beds Regt BEF, France writing to his sister, Mrs Taylor requested her to call and see Mrs Ernest Dear, wife of Pte Ernest Dear of the Beds Regt and ask if she has heard from him lately as I have not seen or heard anything of him for three weeks and I begin to think he is wounded or killed”. The Biggleswade Chronicleof 10 December 1915 reports “ It is now about 6 months since his (Pte Ernest Dear) wife last heard from him. She has been officially informed that her husband was missing and she has also received a letter from the Record Office asking if she had received any information regarding the fate of her husband, either by letter or from any soldier although she has heard many rumours concerning him, yet nothing confirmed”. Finally, in the Bedfordshire Times & Independentdated 10th March 1916 we read “ Much anxiety has been experienced by Mrs Ernest Dear regarding the fate of her husband, Pte. E. Dear, 1st Beds Regiment who has been reported missing since July of last year, and now she is informed that his death occurred in the field on the 11th July, through mine explosion. An attached letter stated that the King assures her of the true sympathy of his Majesty and the Queen in her sorrow”.

He is remembered with honour at the Ypres (Menin Gate) memorial. 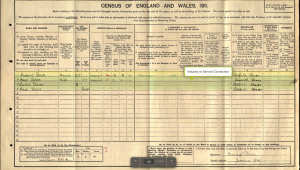 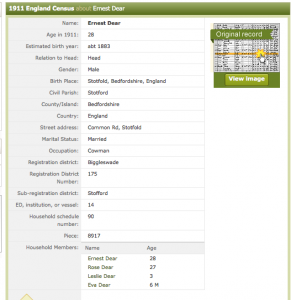 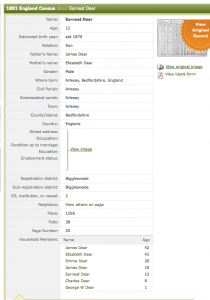 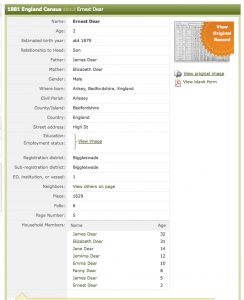 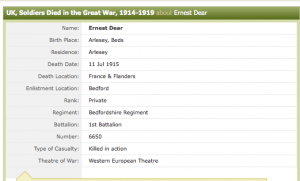