Person(s) placing the cross on behalf of the Arlesey Remembers You Project: Christopher Starr & Steve Worboys

Ernest was born in Flaxby, Yorkshire in 1885, the son of Richard and Ada Futter.

Ernest married Elizabeth Ellen Bowskill-Dear at St Peter’s Church Arlesey on 15th November 1913. They had a daughter, Rosa Maud born in Biggleswade on 25th October 1914. The service records also list another daughter, Doris Elizabeth born on 17th March 1913 in Stotfold, and listed as illegitimate. They lived in Church End, Arlesey and Ernest worked in Letchworth.

He joined the West Riding Regiment on 2nd February 1904 at the age of 18 and signed up for 8 years’ service. Ernest transferred to the Army Reserves on May 17th 1912 at Mill Hill and was released from the Army after the expiration of his engagement on 22nd February 1913. On 7th March 1912 Ernest was registered for Civil Employment – the documents to accompany this registration tell us he was of very good character and had been awarded two Good Conduct badges whilst serving in the Army. He was a Regimental Signaller, a Clerk in the Quartermasters Office and then a Clerk in the Brigade Office. He was looking for work in the Postal service and was intending to live at 19 North Street, Isleworth, Middlesex.

He was mobilised for war at Halifax on 5th August 1914 and arrived in Le Harve on August 16th. Ernest was injured during the Battle of Mons and died of his wounds, in hospital, on 6th September 1914.

Ernest was awarded the 1914 Star, the Victory Medal and the British War medal which were sent on to his widow, Elizabeth in 1921. Elizabeth remarried at St Peter’s Church on 3rd August 1918, to Horace Hampshire from Dartford Kent. They continued to live in Church End, Arlesey and were both employed by the Trench Warfare Stores, Arlesey.

Ernest is remembered with honour at the Hautrage Military Cemetery in Hainaut, Belgium. The cemetery was begun by the Germans in August and September 1914, and in the summer of 1918, they brought in to it a large number of British Graves from 1914, mostly from the 2nd Cavalry and 5th Infantry Divisions, from the surrounding battlefields and local cemeteries 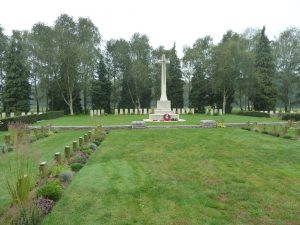 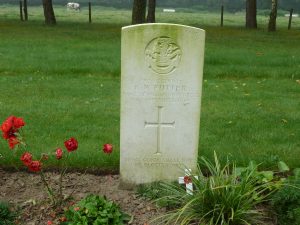 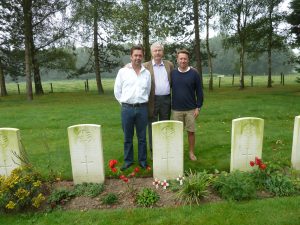 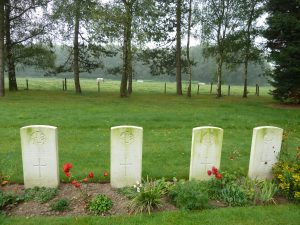 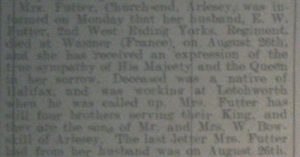