Person(s) placing the cross on behalf of the Arlesey Remembers You Project: Iona Ward

Fred Hosking was born in New Cross, Surrey in 1889, the fifth child of Edwin and Mary Hosking. Edwin was an Engineer. There were 9 children in total: daughters Edith and Gertrude and sons Edwin, Augustus, Owen, Fred, Clifford, Thomas and Reuben. In 1901 the family were living in Bermondsey, London and had moved to Deptford by the time of the 1911 census. Fred by this time had joined the Duke of Cornwall’s Light Infantry and was stationed at Gravesend Barracks, Gravesend when the census was taken.

At the outbreak of the war the 1st Battalion were in Ireland (at the Curragh) as part of the 14th Brigade in the 5th Division. They landed in Le Harve, France on 15th August 1914. Fred served as part of the British Expeditionary Force (BEF) in France. In 1914 the BEF was incredibly small, consisting of 80, 000 soldiers in two corps of professional soldiers made up of long service volunteer soldiers and reservists. At the start of the war the German army were advancing on Paris, with a front stretching from Verdun to Amiens by the end of August 1914. By 3rd Sept BEF had crossed the Marne River to a retreat in the south and was in a position east of Paris between the French Sixth and Fifth Armies. A fatal mistake by the German First Army commander left the right flank of the German attacking force exposed. From 5th to 8th September the French Armies and BEF carried out counter attacks on the German advance, a line of approximately 100 miles from Compiegne (east of Paris) to Verduan. On 9th September the German First Army began to pull back as the British First Army moved on its flank. The German Army made a fighting withdrawal, crossing the Aisne to the higher ground of the Chemin des Dames ridge of the Marne River. It was during this “Battle of Marne” that Fred was killed in action, at the age of 25. The BEF suffered almost 13,000 casualties during the battle, of whom 7,000 had been killed.

Fred is remembered with honour at the La Ferte-Sous-Jouarre Memorial, which commemorates 3,740 officers and men of the BEF who fell at the battles of Mons, Le Cateau, the Marne and the Aisne between the end of August and early October 1914, who have no known graves.

Why is Fred Hosking remembered on the Arlesey War memorial when on the surface it would seem he had no connection to Arlesey?

A newspaper article in the Biggleswade Chronicle on 16th October 1914 helps answer this question: “ Mrs Waterton, The Bury, Arlesey, has received a letter informing her that Fred Hosking of the D.C.L.I has been killed in action. It will be remembered that previous to being called up at the outbreak of war, the deceased was in the employ of Mrs Waterton. He was also well known in the village by taking part at various entertainments as a comic singer. He has fallen in the service of his country, defending a noble cause”.

Gothic Mede Academy pupil, Iona Ward, laid a cross at the Arlesey Memorial on Remembrance Sunday 2014, in grateful thanks for the sacrifice Fred had made for his country. 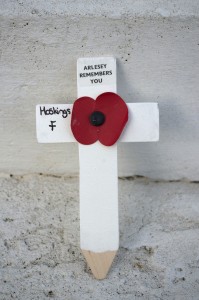 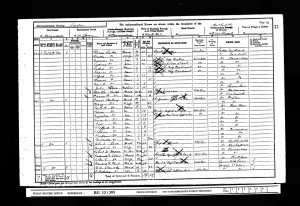 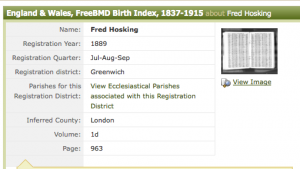 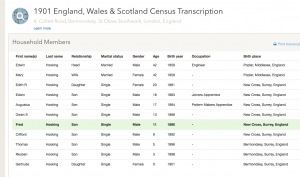 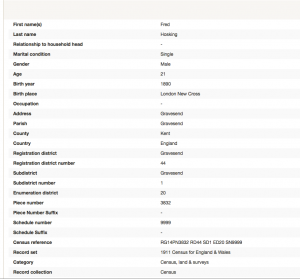 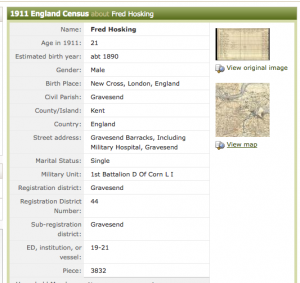 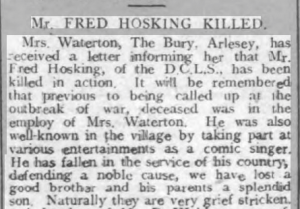 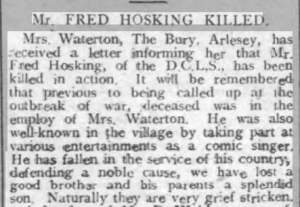 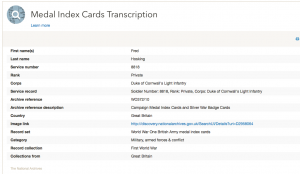 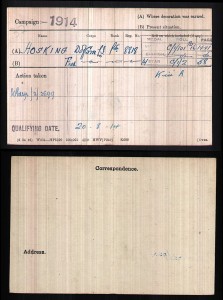 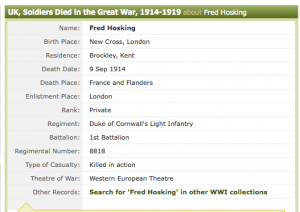 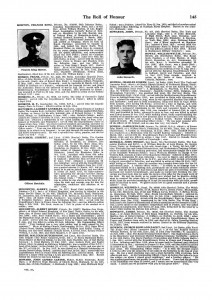