Person(s) placing the cross on behalf of the Arlesey Remembers You Project: Will & Ollie Hazelwood

There is very little information available on Frederick J Albon, the eldest son of J Albon.

In 1915 Frederick married Edith Miriam Albone and in 1916 their daughter Florence was born. They lived at 3 Primrose Lane, Arlesey.

Frederick joined the Bedfordshire Regiment early on in the war (late December 1914) and was later transferred to the Royal Army Medical Corps where he was stationed at Biggleswade. In 1917 he was transferred to the Agricultural Company and was engaged with the motor ploughs.

Frederick died at Holme, near Peterborough after being ill for a week with Spanish influenza. Frederick was buried in St Peter’s churchyard. 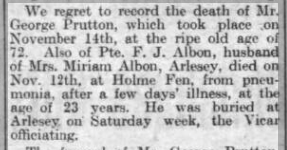 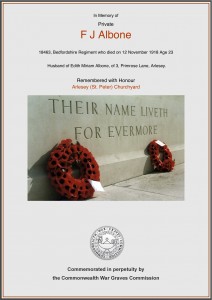