Person(s) placing the cross on behalf of the Arlesey Remembers You Project: James Allen & Family

In 1911 George was living at 7 Holborn Circus in the City of London and was employed as a waiter in a drapery warehouse. In 1914 George married Evelyn Lucy King at Lady Margaret Church, Walworth. It would appear they had two children: Ivy L Howard, born Southwark 1915 and Evelyn G Howard, born Southwark, 1917.

George enlisted for the Rifle Brigade (The Prince Consort’s Own) in Southwark, Surrey as he was living in nearby Walworth. He joined the 16th Battalion, which were a service brigade from St Pancras, London formed on 2nd April 1914 by the Parliamentary Recruiting Committee. On 19th July 1915 the battalion were taken over by the War Office and moved to Hursley Park, Winchester were they joined the 117th Brigade of the 39th Division. In September 1915 they were moved to Aldershot and the Witley, before finally being mobilised for war on the 8th March 1916 and landing in Le Harve. In 1917 they were engaged in action, one significant battle being The Battle of the Menin Road Ridge, which took place from 20th to 25th September in the Ypres Salient in Flanders, on the Western Front. The 39th Division (which included the 16th Battalion of the Rifle Brigade) formed part of X Corps and prolonged the southern defensive flank, from Gronenburg Farm northwards down the slope to the Bassevillebeek. The division suffered badly from German fire as it advanced 800 yards to its objective. During this battle 3,148 British men were killed, one of whom was George Samuel Howard.

George is commemorated on the Arlesey War Memorial and is also remembered with Honour at the Tyne Cot Memorial, one of four memorials to the missing in Belgian Flanders, covering the area of the Ypres Salient. The memorial bears the names of 35,00 officers and men whose graves are not known. 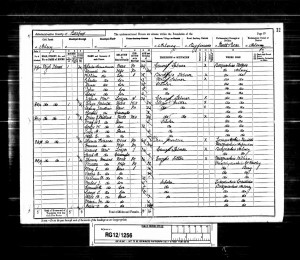 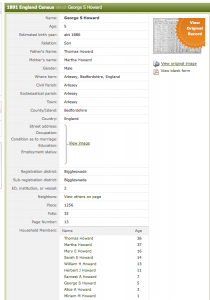 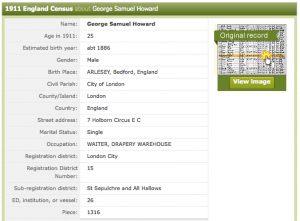 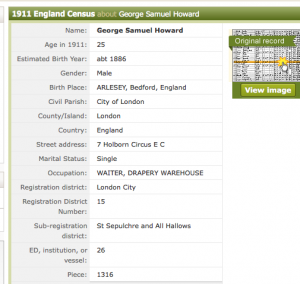 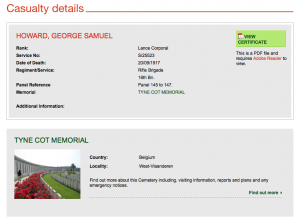 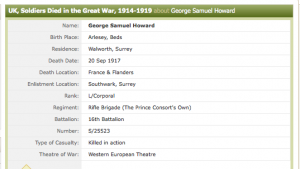