Harry was born in 1893 in Biggleswade. His mother’s name was Sarah and in 1894 she married Samuel Houghton, a brick labourer. The family lived in Straw Street, Arlesey. Harry had 2 older step-brothers, Fred and John, and a half-brother Samuel, born in 1898. In the 1911 census Harry was working as a Brick labourer.

In 1914 Harry enlisted, joining the 3rd Battalion of the Grenadier Guards and was sent to France. Harry wrote home to his family on 2nd October 1915 when he was with the BEF in France “We have been very busy; I couldn’t write before. I have lost all the articles you sent me, so please send again some tags, socks, boot laces and a cake. I dare say you have seen by the papers that we have made an advance. Last Sunday we were in the German second line of trenches ad they were holding a ridge on a hill. I think it was Hill ------. On Monday afternoon we had orders to attack them and we marched down their communication trench and we had no sooner got in the open than we were met with a withering fire from all directions. It seemed as if every German possessed a machine gun and our men started falling like flies, but still we kept steadily going up the hill. The Germans had been shelling us all day and I think they knew what was coming off. It was then getting dark and we started digging ourselves in with our trench tools, but it was terribly hard work and it was pouring with rain all the time and the Germans still kept up their bombardment and by the morning we had only got about two feet deep so that wasn’t much protection for us from the German shell fire and there we had to crouch all the next day and our transports couldn’t get up to us with any food and we were all about done up for the want of a drop of water, which is precious out here. We held that position until yesterday when we were relieved and we have been resting in this place; which is about seven miles from the firing line. I suppose we are going into the trenches again tomorrow and I hope us bombers have a chance of throwing some this time, which we certainly shall if the Germans stop to fight. Please send me a parcel as soon as possible, because it seems years since I heard from you – Always your affectionate son, Harry. PS I couldn’t send this letter before today because we are in the trenches again”.

A day or two after receiving this letter, the family got a second letter stating that Harry had been wounded in the hand and was recovering at a Convalescent Camp in Boulogne, France.

In January 1916 Harry wrote to Mr. H. Cherry of Arlesey; “I have much pleasure in writing these few lines to you on behalf of myself and Private James Bowskill, hoping you and all the Arlesey people are enjoying the best of health; pleased to say that we are also. You will see by the above address that we are with the Entrenching Battalion, just in the rear of the firing line but we are expecting to be sent over to our Battalion any time. Last Saturday we marched about 11 miles for a bath and a clean change of linen, but it was well worth it. At present we are bivouacking in a wood, and it is miles from any village. The water is so scarce, and the only chance of getting a wash is when it rains. There is no water where we are staying, and it has to be fetched from the nearest village and all of it is sued for cooking purposes so we don’t get much chance of getting a drink. It looks very much as if we will be spending Christmas out here but we are quite contented, although it would be much better if we were near a village as there is always a chance of buying a few articles, and we can’t get so much as a cherished Woodbine, and that is what we miss the most, as it helps to pass many a dreary hour away. It seems nice to meet an old friend from the old village, and we wish there were a few more from Arlesey with us. I don’t suppose there are many young men left in Arlesey now, and we think Arlesey has done remarkably well in answering their country’s call, and we don’t think any village has done better. I don’t think we have any more news to send you this time. We shall be very pleased to hear from you at any time, wishing you and all the Arlesey people the best of health, luck and happiness. We remain yours very sincerely, Harry Kitchener and James Bowskill.”

In November 1916 his mother received a letter from the War Office stating that Harry was missing in action. Harry was a keen letter writer and wrote a weekly letter home to his mother, but his mother hadn’t heard from him since September, when he’d written to say he was alright. Pte James Bowskill had written to his parents in early September 1916 and mentioned that he had seen Harry recently and all was well.

In September 1916, the Grenadier Guards were near Ginchy en route to an assault point, the war diary from 14th September states that only 1 man was slightly wounded. The men had to dig their own assaulting trenches, zero hour was 6.20am on the morning of September 15th, with the men in position by 3am. In the advance that followed 4 officers were reported as killed or died of wounds; 31 other ranks were killed, 155 wounded and 209 missing. We can only assume that Harry Kitchener was among these men.

Harry is remembered with honour at the Thiepval Memorial on the Somme, France. 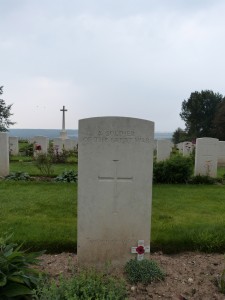 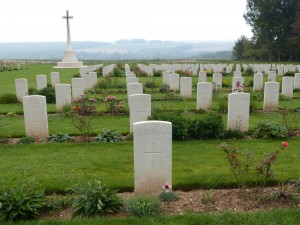 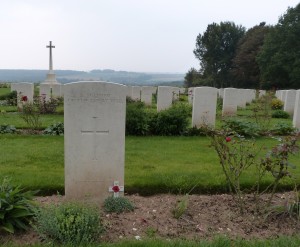 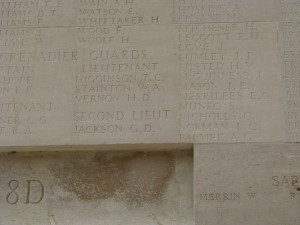 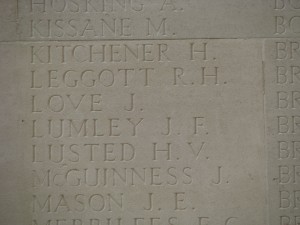 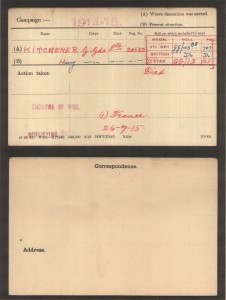 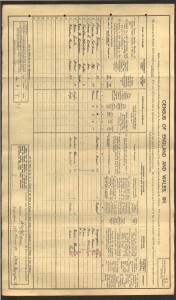 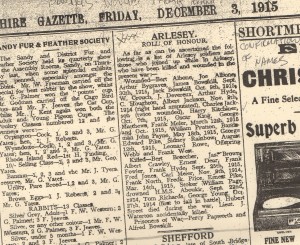 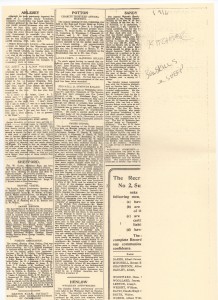