Person(s) placing the cross on behalf of the Arlesey Remembers You Project: Colby Hoighton Small

Albert was born in Shillington in 1876, the son of Thomas and Mary Jackson. In 1891 Albert, along with his parents, brother James and sister Louisa, were living on the High Street in Arlesey. Thomas and James were both employed as brickyard labourers and Albert as an agricultural labourer. Both the boys had previously attended the Arlesey St Peter’s National School. In 1913 Albert married Frances Tyers.

Albert joined the Army on the 11th October 1892 in Hitchin, at the age of 17. He was employed by Mr E Dear as a labourer and was living in Arlesey. He was 5 feet 3 inches tall with a sallow complexion, hazel eyes and brown hair.

When war broke out Albert was with the 1st Battalion of the Bedfordshire Regiment. In November 1914, Albert’s wife was informed that he had been wounded in the right-hand. He had been away for 14 weeks. He was sent to the Alexandra Hospital in Cosham. Mrs Jackson went to visit him in the hospital and said his nerves seemed to be somewhat shattered. She received a letter dated 12th November that read “Dear Madam, On visiting the Alexandra Hospital, Cosham, Hants, I met your husband, who arrived yesterday from France. He is wounded in the right hand and could not write to you so I informed him I would let you know his regimental number 6895, 1st Bedfordshire Regiment  and with the exception of his wounded hand looks very well indeed, considering the terrible time he has passed through in the trenches in Ypres, where he was wounded”.

Albert underwent surgery on his injured hand, which was in a very critical condition. The hand eventually had to be amputated and Albert returned home to Arlesey in May 1915. 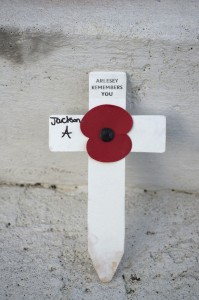