Owen Brown. 116750. His service number is actually 16750 ( the CWGC are correcting the entry) and he originally served in the 8th Battalion after enlisting in September 1914. His grave lies all alone on the Jolimetz cemetery. He was one of the last combat deaths suffered by the regiment in the war and DOW at a Regimental Aid Post in the village, which is why he is the only CWGC gravestone in the village cemetery. He was in charge of a Lewis Gun team who advanced through the Foret de Mormal. They were engaged by a German MG team and as he was returning fire and organising his team, he was mortally wounded. He was well known in local Football and Hockey circles.

Despite living in Letchworth, Owen was born in Arlesey in 1894, in the 1901 census he was living/staying with his Grandmother, Georgina Carter (a straw plaiter) on the High Street "near the Rose & Crown" pub. The Arlesey Remembers You team assume there must have been some members of the Carter family still in Arlesey when the memorial was erected who put his name forward to go on the inscription. His name should also be on the church alabaster memorial.According to the 1911 census he was a Bookbinder & lived in Common View, Letchworth.

Clare Morris, an Arlesey resident who placed the cross on his grave on behalf on the Arlesey Remembers You project in 2014, reported that the Jolimetz Communal Cemetery is a tiny, local cemetery in a small village south of Le Quesnoy. It is actually on an unmarked road, signposted if approaching south from Jolimetz. Unusually, I believe, his grave is the only Commonwealth War Grave in the Cemetery. On entering the cemetery, it is at the far end of the first line of graves on the left. It was in a very clean, tidy state

This photograph was taken in 2015 by a resident of Jolimetz who is researching the history of the village. The Arlesey Remembers You cross can be still be seen a little faded a year on from when it was placed. 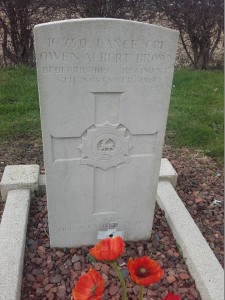 A plaque will be affixed to our village war memorial in memory of Owen Brown. It will be unveiled as part of our Armistice Day commemoration this year.
In addition, Anthony Vienne has written a history of our village, “Souvenirs de Jolimetz” (to be published shortly), which contains a section on Owen Brown. I attach the extract in French, together with an English translation. Much of the information was obtained from your website – thank you again.
We would be very happy to receive any other information you have about Owen Brown or his family. The Mayor of Jolimetz, the councillors and inhabitants would be delighted to welcome visitors from Arlesey at any time — perhaps for a future Armistice Day commemoration?
We hope this will be the start of a lasting connection between our village and your town.
Jackie McCorquodale-Dupont for Anthony Vienne, the Mayor and councillors 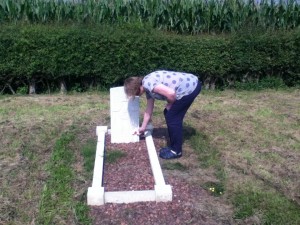 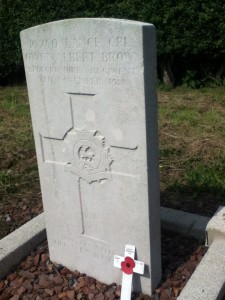 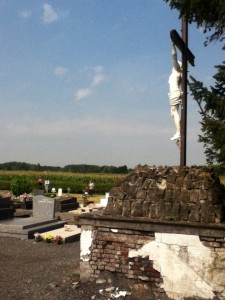 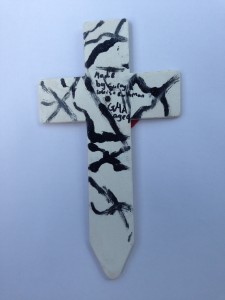 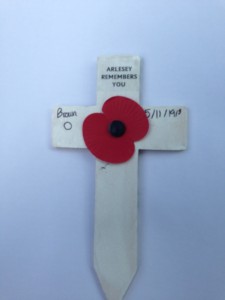 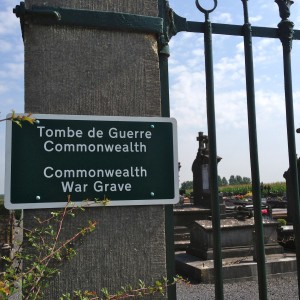 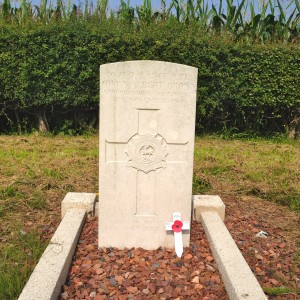 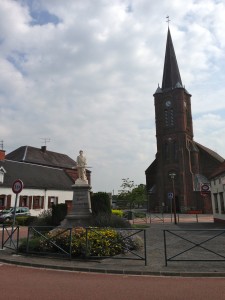