Sidney was born in Arlesey in 1899, the youngest son of James and Lilla Jackson. The 1901 census shows the family lived on the High Street in Arlesey, near to the Rose & Crown Pub. James was employed as a Hammer man. In 1911 Sidney was living with his Grandmother, Mary Ann Jackson, and his two younger sisters, Violet and Winifred on the High Street, Arlesey. The records for the Arlesey Sidings School dated May 9th 1910, tell us that Sidney was sent home from school as his scalp was covered in ringworm! On Feb 23rd 1912 Sidney was discovered by the school headmaster writing filthy language. The following day the whole class were spoken to about the incident and Sidney was punished during recreation time.

Sidney joined the Army; serving first in the Bedfordshire Regiment under service number 4618, then the London Regiment under service number 233527, before joining the 1st Battalion of the Cambridgeshire Regiment. He was killed in action in France & Flanders on 27th September 1918. The War Diary for Sidney’s battalion tell us they had been involved in fierce fighting in the area of Epehy. This village had first been taken by the British in 1917, when it had been heavily fortified. Then the Germans swept back over the area in March 1918, taking the village back and adding further defences. By mid-September 1918, when the Allied advanced finally approached, the village was in ruins, with no buildings left intact. On 18th September, the fight to regain Epehy began, with the Allied advance impeded by torrential rain and gusting wind. The two tanks supposed to be supporting the attack never arrived – 1 due to technical issues and the second was knocked out by enemy fire minutes after the advance began. Losses during the attack on the 18th September and over the following 5 days were heavy - 50 officers and men had been killed, 180 wounded and 8 men were reported missing. On September 26th, the Battalion moved back to the front line. They did not take part in any further attacks during this time but heavy enemy shelling caused further casualties – one of whom was our man, Sidney, who is remembered with honour at Epehy Wood Farm Cemetery.

The Biggleswade Chronicle dated 4th June 1920 reports on the unveiling of the Parish Church memorial on Thursday May 27th – the memorial took the form of a mural tablet of alabaster, crowned with a segmented pediment, set upon a matrix of slate. The wording of the inscription on the memorial read “1914-1919. In memory of the men of this parish who died serving their country in the Great War”. Beneath the 82 names inscribed are the simple words “They Gave All”.

Sidney’s name is inscribed on this memorial, yet for some reason was not included on the main War Memorial on the corner of House Lane. As a result of the Arlesey Remembers You project, his name was added to the memorial in October 2018. 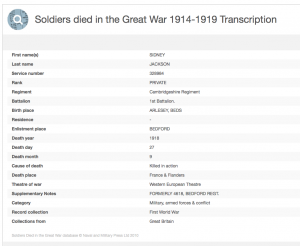